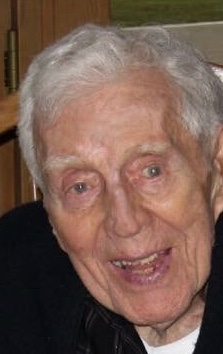 GREENVILLE – Henry G. "Harry" Zellmer, 97, passed away peacefully on Thursday morning, February 14, 2019. Harry was born in Kingston on July 8, 1921, son of the late Henry G. and Mary Light Zellmer. He was raised and educated in Kingston, and following graduation, was accepted to The Juilliard School in Manhattan. He attended Juilliard for one year before being drafted into the U.S. Army during World War II. He fought in Ardennes, Rhineland, and Central Europe. Harry received the Purple Heart and was honorably discharged in 1945. After returning to Kingston, he started to pursue his love for singing at Juilliard once again and there he met Ingeborg Nordquist. He gave up his path to become a professional tenor, to marry and move to Newburgh, NY. It was there that Harry started a career in Banking and started their family of 5 children. He never lost his love for singing and throughout his life could be heard many a Sunday afternoon, singing along with the great tenors playing on his stereo. He moved the family to Montgomery, NY in 1956 and they remained there for 15 yrs. until a divorce. He remained in Montgomery and married a second time to Elaine Palmer, which ended tragically with her death in a few short years. He retired from the position of Manager, at Goshen Savings & Loan Bank at the age of 65. He then met Mary VanWagenen. They were married and lived in Montgomery for a few years before moving to Cape Cod, Massachusetts. After living on Cape Cod for 5 years, Harry and Mary moved to Greenville, where they resided for the last 15 years. Harry was a communicant of St. John the Baptist Church in Greenville, and was a member of Greenville American Legion Post 291. Harry had a great love for his pets-dog Buck, cat Baron, and most recently, cat Serafina ('Baby') Harry is survived by his children, John (Carol) Zellmer, Harry (Barbara) Zellmer, George (Joan) Zellmer, and Elizabeth Zellmer; 9 grandchildren and 16 great-grandchildren; Mary's children, William (Linda) VanWagenen, Mary (Tim) Carey, Ruth VanWagenen, Helen (Jim) Castle, Joe VanWagenen, Kurt (Roxanne) VanWagenen, Sarah Carlson, Paul (Mette) VanWagenen, and Nancy Tillinghast; Mary's 18 grandchildren and 6 great-grandchildren. In addition to his parents, Harry was predeceased by his wife, Mary M. Zellmer on January 28, 2017; daughter, Ruth Zellmer; sisters, Mary Zellmer and Ruth Zellmer, R.N.; his second wife, Elaine Palmer Zellmer; his first wife, Ingeborg Nordquist Neuburger; and step-son, Daniel VanWagenen. Calling hours will be Wednesday, February 20th from 5 until 7 p.m. at A.J. Cunningham Funeral Home, 4898 State Route 81, Greenville. Funeral Mass will be offered on Thursday, February 21st at 10 a.m. in St. John the Baptist Church, 4987 State Route 81, Greenville, followed by burial in Calvary Cemetery, Poughkeepsie. In lieu of flowers, donations to the American Legion Post 291, PO Box 132, Greenville, NY 12083 are appreciated. Condolence page at ajcunninghamfh.com.

Share Your Memory of
Henry
Upload Your Memory View All Memories
Be the first to upload a memory!