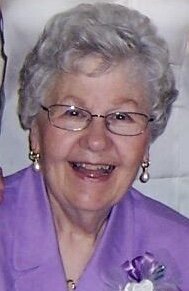 Obituary of Marion A. Farrenkopf

> Marion Farrenkopf née Tisch, formerly of Durham, (b. 12/16/27) passed away peacefully on Thursday, September 30, 2021 at Jefferson's Ferry Retirement Community in South Setauket on Long Island where she lived since 2013. Born in Brooklyn, she spent her early years in Germany and then the Bronx, attending Walton High School where she was president of the GO. Speaking on the radio on behalf of the Red Cross, she was also active in the war effort at home during World War II. > After a lengthy wartime correspondence with US Army Sergeant Frank Farrenkopf, a cousin of a friend, the two fell in love and married in 1947 in Frank's church, St. Margaret, Middle Village. They lived in Middle Village and were active in St. Margaret parish until they retired to a country home in Durham where they lived for 25 years. > During those years, Marion became a gifted quilter, and was the 1998 inductee in the Catskill Mountains Quilting Hall of Fame. In her 40s, Marion realized a lifelong dream to become a nurse, graduating first in her class at the Helene Fuld School of Nursing in Manhattan. She specialized in labor and delivery nursing and assisted at the birth of several of her grandchildren. > Marion is survived by her half brothers Herbert and Harry Tisch, five children: Mary Jane (George) McCartney, Ann (Michael) Gorman, Frank (Julie) Farrenkopf, Joan and Patricia Farrenkopf; eleven grandchildren: Michael and Sarah Gorman, Daniel McCraley, Alice (Matthew)Auth, Nora (Rudy)Sundar, George (Katie)McCartney, Mary (EJ) Kapela, James and Scott (Melanie) Sheridan, and Charles and Mark Farrenkopf. She is also survived by fourteen great-grandchildren: Frances, Conrad and Harold Auth, Matthew, Thomas and Christian Sheridan, Xavier, Eamon and Ayla Sundar, Fiona, Molly and Clara McCartney, and Jay and George Kapela. > Viewing will be at Our Lady of Knock Shrine, 2052 State Route 145 in East Durham at 11 am on Monday, October 11 followed by a Mass of Christian Burial at 12 noon. Interment will follow at Oak Hill Cemetery. Donations may be made to Our Lady of Knock Shrine, c/o Sacred Heart Office, 35 Church Street, Cairo, NY 12413 in lieu of flowers. Condolence page is available at ajcunninghamfh.com.
Monday
11
October

Share Your Memory of
Marion
Upload Your Memory View All Memories
Be the first to upload a memory!
Share A Memory
Plant a Tree