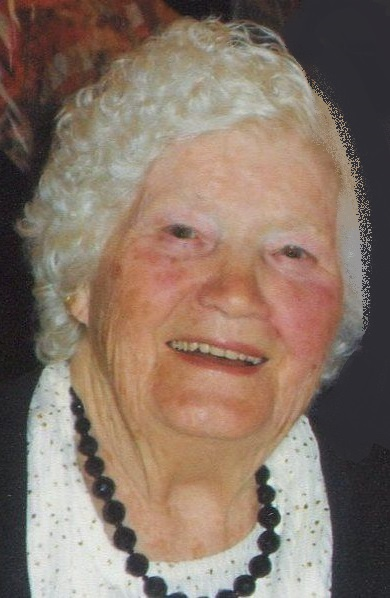 Interment at: Gate Of Heaven Cemetery

Anne Duffy-Downey 12/22/1918 - 8/10/2017 Anne Duffy-Downey died peacefully on August 10, 2017 at the age of 98 with her husband Patrick and son John by her side. Born December 22, 1918 to Patrick and MaryAnn McCaffrey in Ballinamore, County Leitrim, Ireland, she emigrated to the United States in 1940 and married Thomas Duffy in 1945, who predeceased her in 1981. Anne lived in the Bronx, NY before moving to New Hyde Park, NY. Anne worked at The New York Bank for Savings from 1952 before retiring in 1982. Mother to John G Duffy. Predeceased by her daughter Anne Gormley (Dennis) and son Thomas. She married Patrick Downey on May 29, 1988 with her grandchildren being a part of the Memorial Day ceremony. Anne and Pat resided in Oak Hill, NY and New Port Richey, FL sharing mutual admiration and love for each other over the past 30 years. Anne's great joy in life was being surrounded by family and friends, generously sharing meals, laughter, stories, love and passion for Irish culture. Anne was the life of the party and would to talk anyone and would brighten a room wherever she went. Anne was predeceased by her older siblings; Mary Jane Hannon, Eliza Curran, James McCaffrey, Willie McCaffrey, Susan O'Reilly, and her younger sister Brigid Egan. She was also predeceased by her grandson, Christopher Duffy. In addition to her son John, Anne is survived by her husband, Patrick Downey, her six grandchildren, Brian (Cathryn), Jean, Patrick, Kevin, Kara (Brian), Caitlin as well as six great-grandchildren; Liam, Jack, Finn, Matthew, Katherine and Clare. Anne is also survived by her nieces Loretta Murphy and Monica Ferguson and a host of nieces and nephews throughout the US, Ireland, Canada, England and beyond. Calling hours will be Sunday, August 13th from 1 to 4 p.m. at A.J. Cunningham Funeral Home, 4898 State Route 81, Greenville, NY 12083. Funeral Mass will be offered Monday, August 14th at 10 a.m. in Our Lady of Knock Shrine, 2052 State Route 145, East Durham, NY 12423, followed by burial in Gate of Heaven Cemetery, Hawthorne, NY. Memorial donations to Our Lady of Knock Shrine will be appreciated. Condolences may be expressed at ajcunninghamfh.com.

Share Your Memory of
Anne
Upload Your Memory View All Memories
Be the first to upload a memory!
Share A Memory