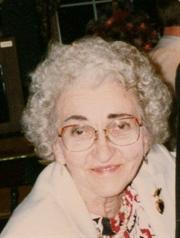 Eleanore Wickham Bowman, 91 years, of Albany, passed away on Monday, Mar. 15, 2010 at Saratoga Hospital in Saratoga Springs. She was born in Branchville, NJ on Apr. 26, 1918, daughter of the late, Mr and Mrs Ross Wickham. Eleanore was raised in the Old Vanderbilt House on North St. in Greenville. She was a Greenville Central School graduate, Class of 1935 and went on to graduate SUNY Albany in 1939 and her Masters Degree in Education at SUNY Albany. Eleanore was a typist employed by the NYS Dept. of Parole in Albany, NY from 1971 to 1992. She loved to read and enjoyed walking up to 2 miles daily until a few years ago. Besides her parents, Eleanore was predeceased by her beloved husband of 69 years, Frederick Quimby Bowman on Nov. 7, 2009, her two sons, Raymond W. and Kenneth Bowman, a granddaughter, Brenda Bowman, a sister, Barbara Wickham Allen and a brother, Robert Wickham. Surviving is her son, Ronald L. Bowman (Janice) of Baldwinsville, NY, a granddaughter, Lisa Wilson (David), a grandson, Michael Bowman (Jill Tierney), four great grandchildren, Kayley, Brenna, Cody and Kyle, a daughter-in-law, Yvonne and her daughter Arlene, two nephews, Robert Wickham and James Decker and two nieces, Jean Schermerhorn and Joan Delosh. Funeral service will be Saturday, Mar. 20 at 1 PM at the Cunningham Funeral Home, 4898 SR 81, Greenville. Friends may call at the funeral home prior to the service from 12 noon to 1 PM. Interment will be in the Greenville Cemetery. Light a Candle at ajcunninghamfh.com.
Print
Thursday
18
March