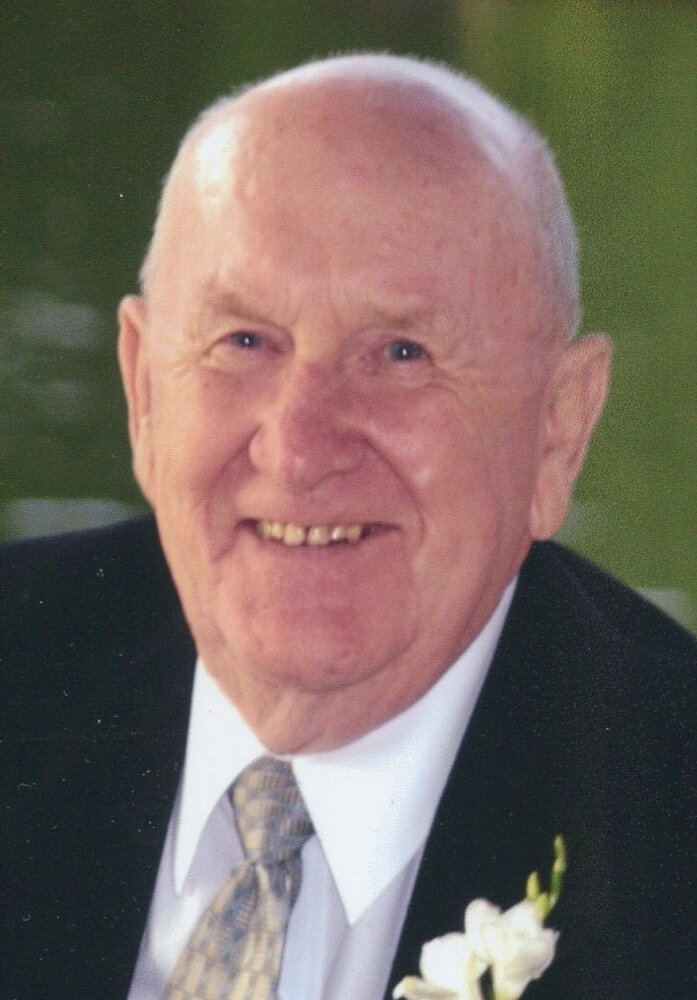 Born in Buffalo, NY on October 22,1930, he was the son of the late Norman and Anne (Bischoff) Marquardt. Jerry moved when he was 6 years old to Groveland, NY where he lived with his family until Grade 6. His family moved once more to Darien Center, NY where Jerry would grow up and attend Alexander Central School participating in many school and town sports. Upon graduation he attended the State University of NY at Brockport where he met his wife, Marie Kusterer. They both earned their degrees in Physical Education and were married on April 4, 1953. While at Brockport Jerry competed in various sports. On a dare he tried out for the soccer team in his sophomore year and secured a starting position on right wing. He set the school record for the most goals in one game, four, which stood unbroken for 50 years. In addition to soccer, he played varsity baseball for three years and was scouted by professional teams for soccer and baseball. Following graduation Jerry and his wife moved to Greenville, NY where he taught Physical Education at Greenville Central School for five years. He gained coaching experience in cross country, track, basketball and baseball. He also spent many summers working for his father-in-law at Kusterer’s Meat Market. In 1959 the family moved to Hyde Park, NY where Jerry would stay for the remainder of his teaching career. After coaching baseball and JV basketball for three years he became the varsity basketball coach at Roosevelt High School and would remain so until 1976. During the 1960’s he received his Masters’ Degree from SUNY Albany in Guidance Counseling. Highlights of his career were coaching both of his sons, winning the 1962-1963 Section I Division A Championship as well as the Section I A-AA Championship, and the Dutchess County Scholastic League Championship in 1971. He was honored as the 1970-71 and 1975-76 “Coach of the Year” elected by fellow coaches in the DCSL. Touching many young lives, helping players achieve scholarships, and seeing three former players achieve professional status, he retired from coaching in 1976.  He continued to serve as Roosevelt High School’s first Athletic Director until his retirement from teaching in 1987. During retirement he would also continue to serve as Co-Chairman of the Section I NYS Boys Basketball Committee.

Jerry and his wife helped to establish Mar-Gas, a propane gas business, with their son Dan who went on to own and run the business for many years. Jerry was a member of St. John’s Lutheran Church in Poughkeepsie, NY where he served as an usher and a member of the Scholarship Committee.

Aside from his career Jerry, was happiest when with his family. His eight grandchildren adored his silly sense of humor and were the recipients of his generous nature on many occasions. His great-grandchildren knew him as Gg-pa. He loved sports, (go Yankees and Tar Heels), dogs and family. Following the passing of his beloved Marie, he lived with his son, Dan and his daughter-in-law Debbie in Greenville, NY as well as in North Carolina.  In recent years he moved north to be with his daughter, Chris and her husband Neil. He eventually moved to the Danforth Adult Care Facility in Hoosick Falls NY. Jerry’s life was blessed with family and close friends with whom he enjoyed many good times. He will be remembered as an honest, fair, and generous man.

He was pre-deceased by his wife, Marie, his sister, Shirley Westermeier, and his son Conrad.

A memorial celebration of life service will be held at the South Westerlo Congregational Christian Church at 282 CR 405 South Westerlo, NY on Saturday, January 7, 2023 at 1:00 PM followed by a time to visit and share. A private burial will take place at the Greenville Cemetery. In lieu of flowers memorial contributions may be made to St. Jude’s Children’s Hospital, a charity that Jerry supported for many years. Arrangements by A.J. Cunningham Funeral Home, Greenville. Condolences can be posted at ajcunninghamfh.com.

Share Your Memory of
Gerald
Upload Your Memory View All Memories
Be the first to upload a memory!
Share A Memory
Plant a Tree