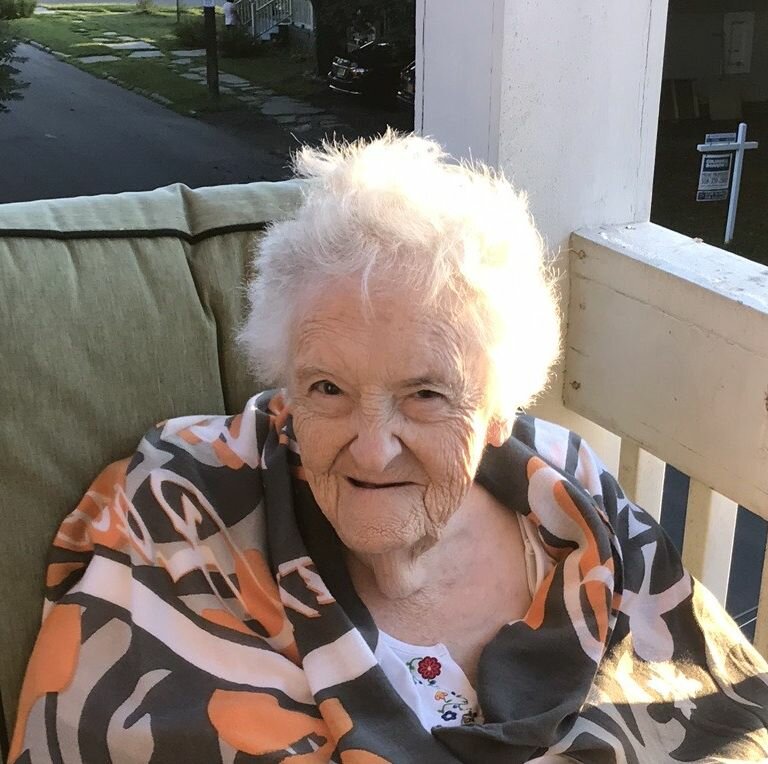 Mary Catherine Weidman, 96, passed away on Friday April 8, 2022. She was born on October 3, 1925 to the late John G. and Marie Magann. She was formerly of Dundalk, MD and was currently residing in Rensselaerville, NY. In addition to her parents, she was predeceased by her husband, Virgil A. Weidman. She is survived by her children, Francis Weidman (Victoria), Dolores Weidman (Mathew), Virgil Weidman (Sue), Ralph Weidman, and Helene Vincent; grandchildren, Leah Raley (Danny), Joshua Faulkner, Jessica Marley (James), Rose Vincent (Mike), Dustin Vincent, Kimie Korenaga, and Naomi Korenaga; great-grandchildren, Josiah, Connor, and Ava; several nieces and nephews in NY; and the Jerome Murphy clan of Maryland. Special gratitude for her earthly guardian angel David Zotta and Patty, her caretaker, who supplied an endless array of flowers all year long and companionship for over 2 years. In her younger years, she was a parishioner of St. Rita’s Church, Dundalk, MD, where she also attended grade school. She was a graduate of the first graduating class of Catholic High School, Baltimore, MD. She also attended night school at John Hopkins University for radio and electronics, where she went on to work for Bendix and the signal corps during WWII. She was involved in girl scouting from an early age and later became a leader for several years as well as a cub scout den leader at St. Rita’s. Born and raised in St. Helena, she was an advocate for the area youth and various community programs. She wrote a weekly column for the Dundalk Eagle. After her husband passed, she returned to college and was a graduate of Dundalk Community College, where she earned a degree in Gerontology. She worked for the Dundalk Department of Aging as an activity coordinator at various senior centers throughout Baltimore. Mary was also a seamstress, a talent she learned from her mother. She also learned to play piano at a young age and played up to her 96 plus years. The later part of her life, she moved to Rensselaerville, NY and was a parishioner of St. John the Baptist Church in Greenville. She was a volunteer for the Rensselaerville Historical Society and the firehouse blood drives. She attended many lectures and seminars at the Institute of Man & Science and shared her joy of learning with her family. After her retirement, she enjoyed traveling around the country to visit her children and grandchildren. She spent many years snowbirding in Hawaii, where she helped raise her grandchildren. Mary was the story holder of her family history and of places in Baltimore. She had journals of short stories and poems she created throughout her life. She instilled in her children love and dedication to God, country, and family. Death can never separate those who are bound together by the ties of pure love. Mary has been privately cremated. A Memorial Mass will be offered on Wednesday April 13th at 11am at St. John the Baptist Church, 4987 State Route 81, Greenville, followed by burial in Rensselaerville Cemetery. Arrangements by A.J. Cunningham Funeral Home, Greenville. Condolences can be posted at ajcunninghamfh.com.
Wednesday
13
April

Share Your Memory of
Mary
Upload Your Memory View All Memories
Be the first to upload a memory!
Share A Memory
Plant a Tree