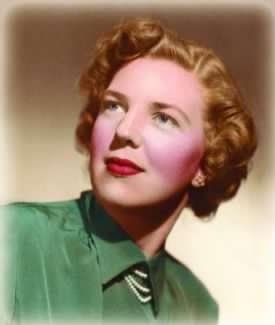 Obituary of Vivian A. von Schenk

Please share a memory of Vivian to include in a keepsake book for family and friends.
View Tribute Book
DURHAM – After 94 years of a beautiful, purposeful life, Vivian A. von Schenk went to heaven on Sunday, November 1, 2020. She was born in Staten Island on February 18, 1926 to Norwegian Lutheran immigrants John H. and Sigrid Rueness Johnsen, a heritage that no doubt shaped her life, a life of quiet kindness, humility, strong faith and generosity (all while being impeccably dressed). Vivian was a graduate of Drew University in New Jersey. She was able to graduate in three years despite having a hearing impairment which afflicted her at a very early age. After graduating, Vivian worked as a statistician in New York City for several years. In 1951, she was a bridesmaid in her cousin’s wedding when she met her future husband, the Reverend James von Schenk, an Army Chaplain and Assistant Pastor of St. Paul’s Lutheran Church in Oak Hill, NY, which was started by his father Berthold von Schenk in 1949. The next 5 years were spent starting a family in various locations around the world, including Germany, Alaska and New Jersey, while James served in the Army. In 1961, they settled in the Bronx, NY where, for the next 15 years, they faithful served the parish of Our Savior Lutheran Church and School while raising their 3 children. In 1977 they moved to Albany, NY where Vivian was employed as a bookkeeper at Griffin Greenhouse Supply while her husband served at St. Matthew Lutheran Church. They retired to Durham, NY in 1986. During her lifetime, she served the Church faithfully as a devout Lutheran, but welcomed and appreciated people of all faiths and backgrounds. She did not judge, but rather welcomed and accepted. All one had to do was witness her smile as evidence of this. Following the passing of James in 1990, Vivian met and married Miles Muth. They enjoyed traveling and resided in Arizona for 15 years. After Miles passed, she returned to Durham and has spent the last 6 years with her daughter Erika and family. Vivian maintained her long relationship with St. Paul’s Lutheran Church where despite her hearing impairment, she served as church organist for many years. Vivian is survived by three children, who were blessed beyond belief to call her “Mom”: Michael (Dorothy) von Schenk, Stephan (Carolyn) von Schenk, and Erika (Patrick) Gallagher. She had a special bond with all 8 of her grandchildren and was blessed with 7 great-grandchildren and one on the way. Vivian is also survived by three nieces. In addition to her parents and husbands, she was predeceased by two infant daughters, Martha Jean and Mary Helen; and her brother, John Johnsen. There is sadness but also joy in knowing that Mom, after a life well lived, is in heaven and in eternal peace. In her quiet softness, she mattered. A memorial will be conducted at a later date. Condolence page is available at ajcunninghamfh.com.

Share Your Memory of
Vivian
Upload Your Memory View All Memories
Be the first to upload a memory!
Share A Memory