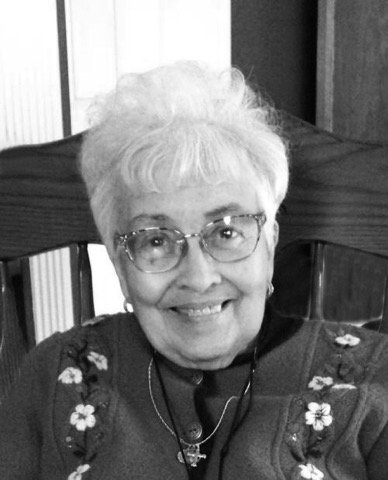 Obituary of Teresa A. Pape

Please share a memory of Teresa to include in a keepsake book for family and friends.
View Tribute Book
DELMAR – Teresa Barbara Altimari Pape, 91, passed away on Sunday morning, November 1, 2020. Teresa was born in Coeymans on May 28, 1929, the daughter of the late Thomas and Angeline (Palmer) Altimari. Teresa retired from NYS, after a long career with the Division of the Budget where she worked as an executive secretary. She was a lifelong communicant of St. Patrick’s Church in Ravena. Teresa loved being around family. She loved to cook, bake and host large family gatherings especially during the Holidays. Teresa adored her grandchildren and great-grandchildren and would light up whenever they came into the room! She is survived by three children, John Pape, Lawrence (Audrey) Pape, and Maryellen (Robert) Brehm; seven grandchildren, Lawrence (Sherri) Pape, Joanna (Richard) Nolan, Sarah (Seth) Schaefer, Amy Pape, Kelly (Andrew) Kang, Zachary Brehm, and Patrick Brehm; three great-grandchildren, Zayvier Nolan, Adriana Pape, and Nolan Pape; her sister Gilda Libertucci; sisters-in-law Clara Altimari and Barbara Pape; and brothers-in-law Robert (Delphine) Pape, and the Reverend William H. Pape; as well as countless friends and extended family. Teresa was married to her husband, John P.“Chick” Pape on October 7,1950. Teresa and Chick celebrated 68 years of marriage together, prior to his passing February 19, 2019. In addition, Teresa was predeceased by her son Paul Pape; brothers Frank Altimari, Michael (Jenny) Altimari, and brothers-in-law John Libertucci, Joseph Pape, Carmino (Skippy) Pape, Alfred (Mary) Pape, Edward (Constance) Pape and Lawrence Pape. A Mass of Christian Burial will be offered privately. Entombment will be in St. Patrick’s Mausoleum, Coeymans, NY. In lieu of flowers, donations may be made in her memory to either St. Patrick’s Church, 21 Main Street, Ravena, NY 12143 or the Juvenile Diabetes Research Foundation. Teresa’s family would like to thank her many friends, physicians and the staff at Atria Delmar Place and Teresian House for their care and kindness. Arrangements by A.J. Cunningham Funeral Home, Ravena. Condolence page at ajcunninghamfh.com.

Share Your Memory of
Teresa
Upload Your Memory View All Memories
Be the first to upload a memory!
Share A Memory