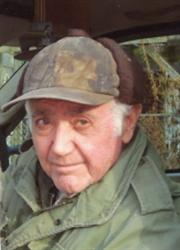 GREENVILLE - Vito Abate, 79 years, passed away at home on Wednesday, June 27, 2012. Vito was born in Calitri, Italy on Oct. 25, 1932, son of the late VinCenzo and Filomena Di Maio Abate. He came to the United States in 1949 and served his country in the US Marine Corps during the Korean War, attaining the rank of Sergeant; his awards include the Good Conduct Medal, Korean Service Medal, UN Service Ribbon, National Defense Medal, Navy Occupation Service Medal and Korean PUC. Vito was a Carpenter in the Westchester area following his military service. He moved to the Greenville area in 1965 where as a Master Carpenter he worked on the Desmond Americana in Colonie as well as operating the farm in Greenville. Vito was an avid hunter and member of the NRA. He was an active member of the Greenville American Legion Post 291. Vito was a loving husband, father and grandfather. Besides his parents, Vito was predeceased by a daughter, Teresa Gleason, and two brothers, Tom and Vitale Abate. Survivors include his wife, Carol &quot;Cookie&quot; Schlegel Abate; a son, VinCenzo Abate (Jennifer); three daughters, Angela Montalbano (Chris), Carla Abate Cavanaugh (Matt) and Jomarie Giovanniello (Jesse); his grandchildren, Nicholas and Victoria Montalbano, Stephanie Gleason, Isabella and Vito Abate, Gabriel and Dylan Giovanniello and Lyle Cavanaugh, and a sister, Rose Cubelli. Funeral service will be Saturday, June 30 at 9:30AM from the A.J. Cunningham Funeral Home, 4898 SR 81, Greenville, with a Mass of Christian Burial at 10AM at St. John the Baptist Church. Interment will follow in the Greenville Cemetery. Friends may call at the funeral home on Friday from 4 to 8 PM, during which time the American Legion Post 291 will conduct a service at 7PM. Those who wish to remember Vito in a special way may contribute in his memory to either the Community Hospice of Albany County, 445 New Karner Rd., Albany, NY 12205 or the Greenville American Legion Post 291, PO Box 132, Greenville, NY 12083. Light a candle at ajcunninghamfh.com
Print
Saturday
30
June