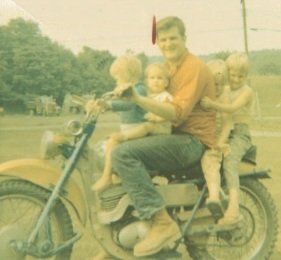 David L. Flach, 77, of Coeymans Hollow, NY, passed away peacefully on Friday May 15, 2020, with his family around him. Born in Albany Hospital, July 4, 1942, he was the son of Rev. Charles and Catherine (Schwebler) Flach. David was a welder by trade, as well as a successful business owner and farmer. David started “Blaisdell’s Power Equipment” in the early 70’s where he sold Rupp minibikes and snowmobiles as well as lawn mower and garden equipment. He later changed to “Dave Flach’s Sales and Service” where he began selling Triumph and Yamaha motorcycles and Arctic Cat and Rupp snowmobiles. David began a welding & piping business in the late 70’s, working with and as a member of the Local #7 Pipefitters Union, he was responsible for building the CIBRO Fuel Refinery in Albany, NY. David later owned Hi-Groove Speedway in Winchester, NH, and Accord Speedway in Accord, NY, where he ran motorcycles, go-carts, stock cars, and sprint cars. He began Echo Valley Motocross in Coeymans Hollow, NY, which continues to see riders today. David had a lifelong passion for motorcycles and racing. He rode and raced motorcycles himself until he was 70. He loved sharing his passion and knowledge of motorcycling to those young and old. David took his four children on many motorcycle and snowmobile rides, and many memorable vacations when they were growing up. He also took them to motorcycle races, where he competed along with his children. They have remarked how “fun” he was as a Dad for them when they were young. David was a great teacher and role model for many over the years. He taught his children to be independent, flexible, hard-working, and God-loving people. He was also a loving uncle to his many nieces and nephews. In the 70’s, David was a Royal Ranger Leader in the Alcove Church (built by his father, Charles Flach in 1955) and influenced many young men to serve God, and share his love of motorcycles. In later years, David owned a farm where he raised beef cows, as he had a love for animals as well. David’s love for life and passion for motorsports influenced so many people during his life. He impacted the racing community in so many ways and in so many places. He will be remembered for his “big heart” for seeing children ride, his generosity, and his zest for Life David is survived by his wife, Henriette "Hank" Mahony of 35 years; four children with his first wife, Judith A. Spendiff, three daughters, Laura Ritzel, Amy (Jeff) Radley, Rachel (Guy) Weidman and his son, Stephen (Wendie) Flach, as well as two stepchildren, Joan and Dennis Mahony. Also, by his two brothers John (Rita) Flach, James (Mary) Flach and one sister, Esther (Frank) Florez. David had eight grandchildren, three great grandchildren, and many cousins, nieces and nephews. We invite you to join us in a celebration of his life at his farm (Echo Valley Mx), 353 Blodgett Road, Coeymans Hollow on Sunday, May 31st at 2pm. Please come and share your stories with family and friends. In lieu of flowers and in memory of his love for life, kids and motorcycles, the David Flach Motorcycle Scholarship Fund has been set up for kids to learn the same love of riding that he had. To make contributions contact Stephen Flach (518-727-0311). Condolence page at ajcunninghamfh.com.

Share Your Memory of
David
Upload Your Memory View All Memories
Be the first to upload a memory!
Share A Memory