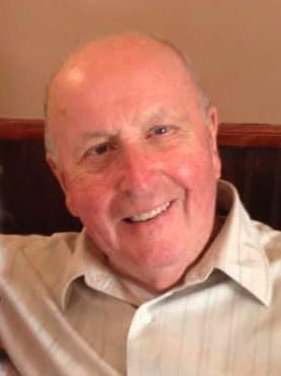 FREEHOLD - Michael Grogan, 88, passed away peacefully on Wednesday January 22, 2020 at the Community Hospice Inn at St. Peter’s. He was born on November 22, 1931 in County Clare, Ireland to the late John Sr. and Nora Meaney Grogan. After moving to NYC in the 1950’s Michael began working for American Can Company. He met and married Sarah Thompson on October 4, 1969. He then worked as an engineer for Con Edison and they moved to Mahopac to raise their four children. He retired from Con Edison in 1994 and Michael and Sarah moved to his dream land in Freehold, where Michael enjoyed staying busy by being outside, working on home projects and mowing his lawn. He was a member of the Ancient Order of Hibernians, of the Irish Cultural Center, and was an usher at Our Lady of Knock Shrine in East Durham. He enjoyed watching football, spending time with his grandchildren, and taking care of his wife. In addition to his parents, Michael was predeceased by his siblings, Patrick, Thomas, May, and John. Michael is survived by his beloved wife, Sarah; his children, Sarah (John) Pallas, and Thomas, David (Katie), and Daniel Grogan; his grandchildren, Ashley, Michael, Noah, Evelyn, Liam, and Claire; his sister, Gertie (the late Pete) Casey; and many nieces and nephews. Calling hours will be held on Thursday January 30th from 4 to 8pm at the A.J. Cunningham Funeral Home, 4898 State Route 81, Greenville. A Funeral Mass will be held on Friday January 31st at 1pm at Holy Trinity/St. Mary’s Church, 429 E. Allen St., Hudson, NY 12534, followed by burial in St. Patrick’s Cemetery, Catskill. In lieu of flowers, donations can be made to St. Joseph’s Seminary ℅ St. Joseph’s Seminary Development Office, 201 Seminary Ave., Yonkers, NY 10704. Condolences can be posted at ajcunninghamfh.com.
Thursday
30
January

Share Your Memory of
Michael
Upload Your Memory View All Memories
Be the first to upload a memory!
Share A Memory
Plant a Tree