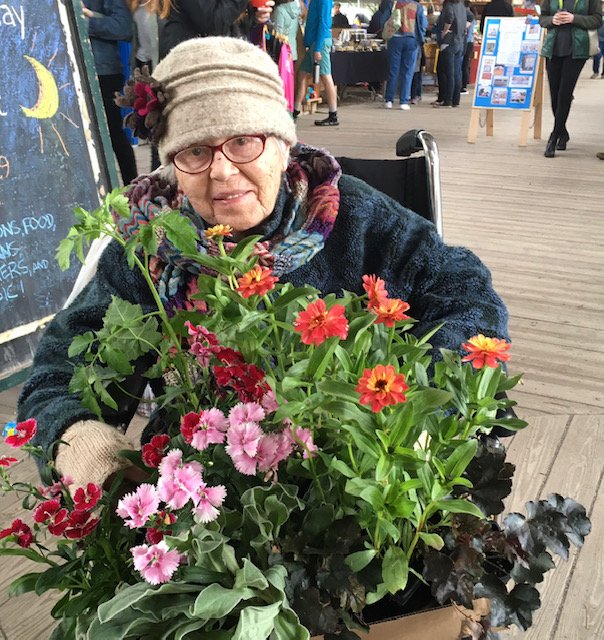 Sonja Demakos, of Ithaca, NY, took her leave early Thanksgiving morning, November 28, 2019, with her eldest son by her side, before the sun came up and the stars were shining. For the last five years of Sonja's time in Ithaca, after being diagnosed with Alzheimer's, and in the loving embrace of her family, Sonja gave family, friends and a community of devoted care givers, grace, peace and love in spite of her debilitating illness. It has been said that one of her smiles would bless one's entire day. Sonja was born to Martha Bohme and Otto Zeun in 1926 in a small village in eastern Germany - in what would later become communist controlled East Germany. Twelve years later, just before the onset of WWII, Sonja was able to emigrate to the United States where she became a US citizen. She and her family first lived in New York city and later settled in the Catskill Mountains in upstate New York where her family ran a very successful country resort. On a return trip to NY city to visit a girl friend, she met her future husband, Demetrios (Jim) Demakos. They married and settled back in the mountains and had three children. Sonja believed in family, community and the need to take care of our precious planet. She loved everything that was simple and natural. She was generous beyond measure, curious, and witty up to her last weeks. She was a quilter and a crocheter, but only as a means to build friendships through her quilting and crafting groups and give homemade gifts that could bear her love. Sonja is predeceased by her husband, Demetrios Demakos (1979) and is survived by her three children, Steven Demakos, Jayne Demakos (Cary Joseph) and Michael Demakos (Erin Barton); her beloved sister, Linda Zeun-Suwara and her children, Molly and Martha; three grandchildren, Demetria, Nicolina and Dylan; and a host of nieces, cousins and extended family in Germany and in the US. Sonja was buried next to her husband in a small hillside cemetery in the Catskill Mountains she so loved. A private graveside service followed by a small memorial, took place on December 4 in the Oak Hill area, upstate, NY. Donations in honor of Sonja may be made to: Oak Hill Durham Volunteer Fire Company, PO Box 51, Oak Hill, NY 12460 (518) 239-4837 or to: Hospicare & Palliative Care Services 172 E King Road, Ithaca, NY 14850 (online) https://www.hospicare.org/donate/

Share Your Memory of
Sonja
Upload Your Memory View All Memories
Be the first to upload a memory!
Share A Memory
Plant a Tree