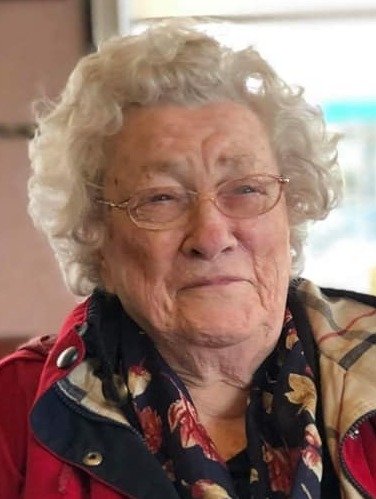 Ann C. Tumey, 98, passed away peacefully on September 2, 2019 at The Pines in Catskill.  She was born in Baldwin, NY on December 24, 1920, the daughter of John and Anna (Young) McKevitt.  In addition to her parents, she is predeceased by her loving husband of 64 years, Harold; her son, Brian; and her four siblings, Gertrude, Rose, Kathryn “Kitty”, and John “Jack”.

Ann was a lifelong Antique Dealer who began her business, The Salt Box, on Long Island in the 1950’s.  After moving to Greenville in 1972, Ann and Harold continued their love of finding and selling antiques.

Ann devoted 21 years to the scouting program on Long Island and later the 4H program in Greenville.  She was a faithful member of St. John’s Roman Catholic Church and served as President of the Rosary Alter Society.  She was an active long-time member of the Freehold Literary Club and a supporter of the Greenville Library.  Ann was a wonderful cook who, with Harold, loved to gather friends and family at their “antique home” in the village of Greenville.

Donations, in lieu of flowers, may be given to the Friends of the Greenville Library, PO Box 8, Greenville, NY 12083.

Share Your Memory of
Ann
Upload Your Memory View All Memories
Be the first to upload a memory!
Share A Memory
Plant a Tree