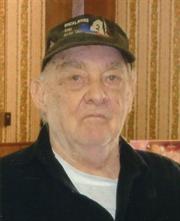 Obituary of Donald A.. Bernard

Please share a memory of Donald to include in a keepsake book for family and friends.
View Tribute Book
Bernard, Donald A. &quot;Dinny&quot; WESTERLO - Donald A. &quot;Dinny&quot; Bernard, age 84, passed away on Wednesday, January 4, 2012 at Stratton DVA Medical Center. He was born in Albany, and lived in Westerlo for many years. Dinny served in the U.S. Army for two years. He was an active member of Bricklayers Local 2, and retired after 43 years. Donald married the love of his life, Harriet LaGrange on August 29, 1948. He was a very devoted husband and father, who enjoyed woodworking, carving and painting. He is survived by his wife of 63 years, Harriet; children, Monica Heslin, Georgi Diamond, Valerie Trossbach (Paul), Jeff Bernard, Marcel Bernard and Roxane Lamb (Steven); brother, Richard &quot;Chubby&quot; Bernard; 14 grandchildren, 14 great-grandchildren. Dinny is predeceased by his parents, Edna and Charles Bernard; and his grandson, Garrett Barton. Calling hours will be Sunday, January 8 from 4 to 8 p.m. at A.J. Cunningham Funeral Home, 4898 SR 81, Greenville. The funeral will be Monday, January 9 at 11 a.m. at the funeral home, followed by burial with military honors at Westerlo Rural Cemetery. Memorial donations to the VA Hospital in Albany, the Westerlo Rescue Squad or the First Baptist Church of Westerlo will be appreciated. Light a candle at ajcunninghamfh.com.
Print
Monday
9
January