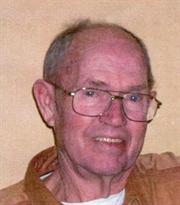 Paul M. Colvin Sr. (76) of East Durham passed away on February 8, 2011 at the Stratton VA Hospital in Albany. He was a carpenter and contractor for over 50 years. He is survived by his loving wife of 50 years, Elsy May, his beloved children Marjorie (Gary) Teator of Pleasant Valley, Donna of Clayton and Paul Jr. of Cornwallville. He was dearly loved by his grandchildren Alisha and Marissa Teator, Thomas and Mary Faith Colvin and Miranda Klein. He is also survived by his cousins Frieda Deyo and Edna Wylie, his sisters-in-law and brothers-in-law, his many nieces and nephews, great nieces and nephews. He was predeceased by his parents and brothers Raymond Losee and Thomas Colvin. Paul served in the U.S. Army, 1953-1955. He was a lifetime member of the East Durham Volunteer Fire Company, the American Legion and Cairo-Durham Elks. Paul loved to play and watch golf. He played in numerous golf and bowling leagues over the years. He enjoyed spending time talking with friends. He especially loved having his family altogether on the weekends. A private cremation was conducted by the Cunningham Funeral Home. A graveside service with Military Honors will be 10am on April 16, 2011, at the Greenville Cemetery immediately followed by a memorial service and refreshments at the Cornerstone Baptist Church in East Durham. In lieu of flowers, donations may be sent to the Cornerstone Baptist Church. Light a Candle at ajcunninghamfh.com.
Print
Saturday
16
April