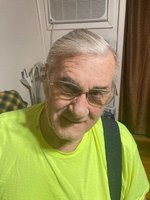 FREEHOLD – Stanley T. Morby, 80, passed away peacefully on Thursday, May 27, 2021 in the Community Hospice Inn at St. Peter’s Hospital. Born on February 20, 1941 in Albany, he was a son of the late William and Jennie Dayter Morby. Stan was a 60 year resident of Freehold, building his own home. He was a self-employed building contractor for many years, building many Dairy Queen restaurants. He later retired from Story’s Nursery in Freehold. Stan was an avid antique car and truck enthusiast, and enjoyed attending car shows. He loved to garden, and take care of his lawn. Stan is survived by his son, Stanley T. (Larissa) Morby, and his beloved grand-daughter, the light of his life, Lorelei Hazel Morby; siblings, Patricia Harbeck and Raymond A. Morby; sisters-in-law, Harriet Morby, Ila Mae Morby, and Jacqueline Morby; many nieces and nephews. In addition to his parents, Stan was predeceased by his beloved wife, Hazel Bahr Morby on January 29, 2009; and his siblings, Dolores Luck, James, Robert, John, Lawrence, Richard, and Gerald Morby, Mary Blaisdell, and Gloria Northrup. Calling hours will be Saturday, June 5th from 9:30 until 11 a.m. at A.J. Cunningham Funeral Home, 4898 State Route 81, Greenville. A funeral service will be conducted at 11 a.m., followed by burial alongside his wife Hazel in Freehold Cemetery. In lieu of flowers, memorial donations to Community Hospice of Albany-Inn at St. Peter’s, Gift Processing Center, 310 South Manning Blvd., Albany, NY 12208 will be appreciated. Condolence page is available at ajcunninghamfh.com.